Cliff Miller of Exceptional Granite is no stranger to hard work. Since he was a young boy, Cliff has made a living for himself and those he loves. At the tender age of twelve, he and his father left Jamaica and moved to LaBelle, Florida where they worked in an orange grove. The pay was mediocre and the work was seasonal, so during the off-season, Cliff and his father harvested watermelons on a nearby farm. When Cliff wasn’t in the melon fields, he was making friends at the Duda Ranch down the road and eventually began work as a cattle hand. It would be years later when he would land the most difficult and rewarding job anyone can know. Cliff became a father to two daughters, Ashley in 1987 and Chelsea in 1992, before taking a job at Kmart to provide for his new family. When Kmart was not providing him with what he needed, Cliff sprung to a new business venture, with help from his brother, and started his own commercial cleaning business in August of 1986.

Cliff and his cleaning crew became wildly popular throughout Florida. As business boomed, he moved his family and the business to Orlando in December of 1997, which enabled him to reach his clients more easily. After 16 years of success in the business, Cliff brought in a supervisor to take over his position and moved back to Pinellas Park, where he would take on yet another opportunity, this time in the granite business.

Cliff used his knowledge of leadership from his previous job to begin staffing the company. “I gathered kitchen supplies for 16 employees, everything from cabinets to tile, and I told those employees to build a kitchen from start to finish.” Miller says, “From those results I chose my lead fabricator, my lead installer and my lead template guy.” Miller had little experience in the granite field, but that didn’t stop his determined spirit. “I then had each lead man teach me everything they knew about the trade. I wanted to understand and be just as involved in every job as they were.”

From the beginning, Cliff gained the respect of his employees and built a community of friendship. Miller says, “I tell my crew all of the time, ‘I am not your boss; we are a team.’ You gave me an opportunity to represent you and your artistic work. I am going to be the biggest sales person for the quality work you do.” It’s Miller’s “golden rule” mentality which he says he learned from his grandmother, along with undeniable talent, that has propelled Exceptional Granite into the business it is today. Residing in Belleair Bluffs and running the business out of Clearwater, Miller has made a name for himself and Exceptional Granite in the community, adding hundreds of home owners, contractors and designers to the list of those who believe in him and his work; a list that first started with young Miller himself, all those years ago. 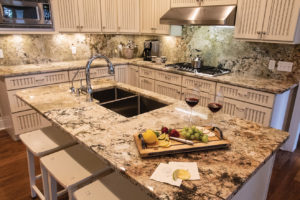 The remodel process first began on the golf greens of the Belleair Country Club. Golf buddies, Cliff and Greg were often in each other’s company when Greg asked Cliff to take a look at his kitchen. “They wanted to upgrade their kitchen without replacing their cabinets, so finding new upscale granite was the way to go.” The Gradys spent six months looking, touching, and feeling different slabs of granite until finding the perfect match. Miller says, “I always tell customers – when you find the right granite, you will know. If you’re trying to love a piece, it’s not the one.” Cliff walked Greg and Gayle through every step of the remodeling process, allowing them creative freedom, but stepping in with expert knowledge when necessary.

“Customers see the big picture, but I know how to look for hidden cracks, finishes and all the small things people might not know to look for that will affect the quality in the long run.”

Once the granite was chosen and ready, the Exceptional Granite team began removing the old granite from the Grady kitchen. “After everything was out we began the templating process with the new slabs, creating a first draft mock-up of how the new granite’s patterns will lay in the kitchen. This is a very important part in the process and our team makes certain customers are present to see the templates on the granite in order to perfect presentation areas and determine if patterns are running the correct way. We continue this process until the customer is satisfied with the layout of their new granite.” Miller said of this job, “I loved watching Gayle and our lead guy José work together on this granite slab. It was a treat to watch their creativity take over until Gayle finally said, ‘This is it.’ Everyone was pleased with the finished product.” Greg and Gayle chose a light granite from Espirito Santo, Brazil, with hues of dark brown and tan and faint specks of purple and blue. The colors reflect the overall color scheme of the kitchen/dining area, all while providing the perfect amount of contrast to the room. 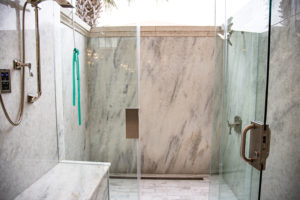 Steve and Jennifer have worked closely with Cliff and his team for many home projects and are no strangers to the steps it takes to find the perfect style and cut for their vision. “For customers who are experienced in home remodels and have worked with us before, like Steve and Jennifer, it’s beneficial to listen and cater to their ideas. For them I enjoy creating miniature mock ups of the space we are redoing so as to get a clear picture of what we have discussed. It then goes back and forth between us, adding and changing things until they are 100% pleased.” Miller says,

“I think much of the time, when people have been working this trade for many years, they start to think clients shouldn’t have a say in the important decisions. For me and my team, when working on a job, those clients are our bosses. We are there to perfect the job and leave them so happy they are dancing on their ears.”

When it comes to the Blume household, Miller says, “They like creativity and they like to be different. For instance, during a bathroom remodel, it was proposed we use a similar style of granite we laid on their counter top for the shower wall. We built scaffolding in order to correctly place the twelve-foot high slab of granite. It was a process, but it turned out fantastic.” Steve and Jennifer Blume chose a light Everest White marble from Brazil with splashes of grey and tan. The brightness of the granite further showcases the vast size of the space, while the touch of contrast is enough to set it apart and allows the shower to be a statement in the master bathroom.

for your next remodel. 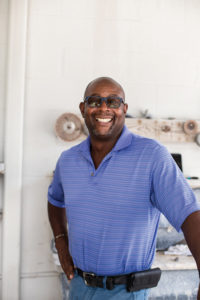 Find him online at www.exceptionalgmi.com

Stop by the Exceptional Granite location: