“The American Dream.” When you hear the story of how Jarrett Bay Boatworks came to be, you can’t help but hear that ubiquitous saying resonating in your head. The process was arduous, and stumbles were inevitable. Long days in Williston, North Carolina of smelling like sawdust and fiberglass resin were followed by long nights, with the added cologne of sweat and varnish. In the end though, the unmistakable Carolina Flare™ was born; the industry standard amongst the best custom sport fishing yachts today. And at the helm of Jarrett Bay Boatworks was Randy Ramsey. 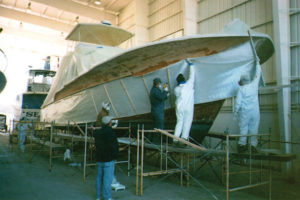 As a child, Captain Ramsey never imagined himself as a boat builder, but loved the sea all the same. With an uncle in the charter fishing business, Captain Ramsey grew up knowing he wanted to be on the water and fishing for a living. And determined he was: “On my 18th birthday, I sat for my federal charter captain’s license with the US Coast Guard and passed. I ran my first chartered fishing trip the very next day.” 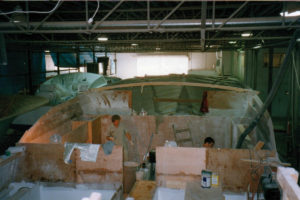 recognizable by today’s standards. Captain Ramsey’s first boat was a 43’ Virginia-built sportfisher, powered by a single 300 horsepower diesel. It plowed the waters off the southern Outer Banks (literally) at 10 knots, or about 11 miles per hour. It was a wet boat in rough seas, and leaked here and there. It didn’t take long for Captain Ramsey to come to the ultimate conclusion that it must be possible to build a better offshore fishing boat. Having learned carpentry, plumbing, electrical, fiberglass, and other skills and trades while working on his and other boats outside of the charter season, Captain Ramsey resolved to build that better boat. “A friend named Jim Beam may have helped talk me into building that first boat,” Captain Ramsey remembers. Understandable indeed, for such an undertaking for the then 24-year-old captain.

After renting a pole barn and declaring it his new base of operations, Captain Ramsey 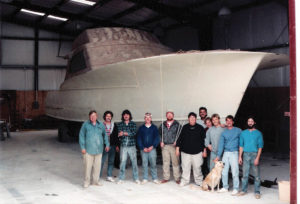 began work on what would become Hull #1: his first custom sport fishing yacht. “I enlisted the help of other captains and craftsmen as I could steal their time,” Captain Ramsey recounts. As one may assume, hurdles needed to be jumped to accomplish this lofty goal. Winters were cold, and the pole barn certainly wasn’t known as the warmest place in Williston. A truly defining hurdle popped up when Captain Ramsey tried to purchase a drum of epoxy resin. The supplier told him that they were only authorized to sell to businesses, not individuals, and asked, “What’s the name of your business?” Having not thought of that yet, but knowing that the pole barn sat adjacent to Jarrett Bay in coastal North Carolina, Captain Ramsey replied, “Jarrett Bay Boatworks.” Some immeasurable quantity of blood, sweat, and toiling later, in 1988, the Sensation splashed into Jarrett Bay as Hull #1. And thanks to several refits and repowering, the Sensation still fishes the Atlantic today.

Running the Sensation was a dream compared to other custom sport fishing yachts of the day. She was nimble, dry, and pleased her customers. She had lines that drew the 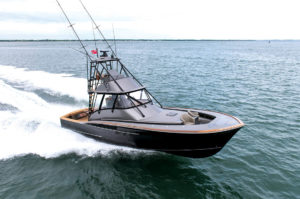 jealous eyes of other captains, and it wasn’t long before the handshakes, “atta-boy’s” and “I need one of those” comments began flowing. One of first to come knocking at the pole barn was Jack Huddle- a well-known local businessman, fisherman and duck hunter. Mr. Huddle decided that Captain Ramsey was on to something special with Sensation, and that newly-minted Jarrett Bay Boatworks was the outfit to build the 43’ custom sport fishing yacht he pictured in his mind’s eye. After a handshake agreement for labor and materials costs, and an understanding that Captain Ramsey wouldn’t work on Mr. Huddle’s boat when the charter season was busy, a deal was struck. Soon after, construction commenced on Builder’s Choice. The result was a reputation-elevating rocket ship for the new boat builder, not to mention three more custom sport fishing yachts for the Huddle family in the following years. And the requests for more custom builds just kept coming.

By Hull #8, it was time to retire the pole barn in Williston and move to a larger yard 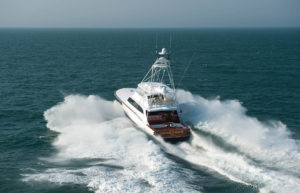 down the road in Marshallberg, North Carolina, which was quickly outgrown. The next move was the last, placing Jarrett Bay Boatworks at its current yard at 530 Sensation Weigh on Core Creek. Time led to advancements in boat building, increasing the speed and precision with which hulls could be completed. “I remember when we used to roll boats out on cut dock pilings, pushing the boat along with a bulldozer. Now we operate a 220-ton and two 75-ton travel lifts, which is better in every way you can imagine,” Captain Ramsey recalls. “We have grown our Jarrett Bay family as well, from just a handful of staff to over 200 employees today working in over 140,000 square feet of space. Some of our folks have been with us for 20 to 30 years. Our staff are our greatest asset.”

By Hull #13, Captain Ramsey moved off the production line and into the business office. “The people we were hiring were just better at what needed to be done, and I 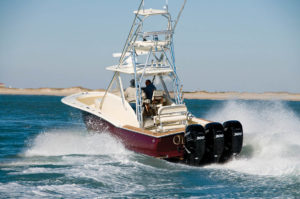 found myself in their way. So, I decided to move to the office and let them do what they do bestcreate the best boats, built to the most exacting standards, for the most discerning clients.” When I asked Captain Ramsey what they were trying to accomplish with each new hull, he replied, “We wanted to have a bilge paint job that was better than a car. Better furniture than in the nicest homes. Better technology than in a 747. Superior carpentry and joining work that was accurate beyond 1/64th of an inch. And we wanted the whole thing to do 50 miles per hour on the open ocean.” 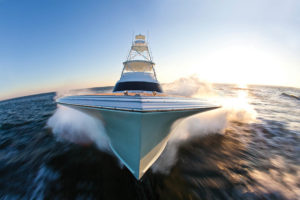 didn’t take long for the ever increasing level of craftsmanship to surpass all expectations of what a custom sport fishing yacht should be. These days, Kevlar® and carbon fiber stringers can be used to add strength while cutting weight, along with titanium drive shafts and carbon fiber consoles. Twin diesel engines are common, are orders of magnitude more powerful, and immensely more fuel-efficient. Seakeeper gyro stabilization systems keep these large boats rock-steady in rough seas, and commercial grade radar and autopilot systems make piloting a 60 foot-plus vessel safe and easy. Prized all the same are safety and reliability. “It doesn’t matter how fast or pretty a boat may be; it must be safe. That’s most important. We don’t want our owners to ever question their safety on our boats,” Captain Ramsey states.

Splashings of early hulls used to be a source of anxiety, what with not knowing exactly 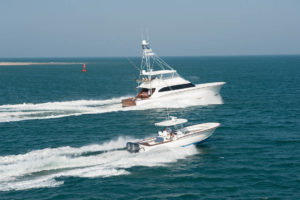 how a boat will sit in the water the very first time. “Now, with our engineering team triple-checking everything, we don’t have to worry about that. They can tell you exactly where the water line will be when you sit that boat in the water,” Captain Ramsey states. The most technologically advanced hull to date has been the 90’ Jaruco (‘ha-ruh-co’), built for the Jaruco Sportfishing Team to replace their 68 Weaver of the same name. The owners inspired the build team to go beyond anything ever attempted before. Captain Ramsey remembers, “They told us ‘Imagine I’ve flown in from Mars on my spaceship to see this boat. I want to be impressed.’ That was the driver for everything that followed. They challenged us to always look for a more advanced option in every aspect of construction.” Jaruco has a wooden hull with carbon fiber stringers and bulkheads for less noise and a superior strength-to-weight ratio. Kevlar® was incorporated into the hull in key places for additional strength without compromising on weight or dimensions. Titanium drive shafts will never corrode, and result in a significant weight savings. A 12’ k-band radar, drawing 220 volts, pinpoints the Jaruco’s position to its captain in its industry-first carbon fiber helm and fighting chairs. Six engineers, specializing in construction, materials science, propulsion, mechanics, and hydraulics constantly poured over the plans and the build, ensuring the exacting standards the Jaruco’s owners expected were surpassed. Captain Ramsey states, “The clients got exactly what they wanted: a technologically superior floating fortress that cruises at 40 knots and has a top end of 45 knots, or about 50 miles per hour. I think everyone was impressed to hear that she made the run from Colón [the north end of the Panama Canal] to Fort Lauderdale in 48 hours.” 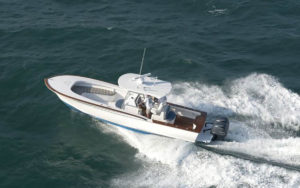 The future for Jarrett Bay looks positive, with four hulls currently under construction. “I’ll retire when I’m dead,” Captain Ramsey adamantly claims. “I have always believed that if we aren’t growing, then we’re dying. We’re always looking for new opportunities, from Jarrett Bay Clothing Company, to Jarrett Bay Home, and also our bars and other offerings. We don’t ever want to settle.” From my seat on the outside looking in, it would appear that Captain Ramsey and the fine artisans at Jarrett Bay and its associated companies have managed to maintain a singular vision across their brands: ‘never compromise on the quality of your work.’ Offering the finest custom sport fishing yachts, stylish and functional clothing, and exceptional pieces for the home and business, the Jarrett Bay brand can elicit that feeling of freedom and excellence for those who trust in it. All brought to you by the American Dream.

Written By
Flocal
More from Flocal
By Ryan Rindone Nothing about the design of a Yellowfin is done...
Read More