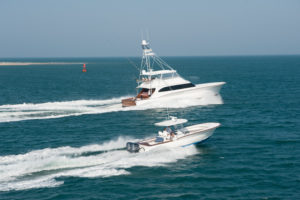 As a native of North Carolina, I spent a tremendous amount of time on the coast, working on marine research, helping with the Big Rock Blue Marlin Tournament, and spending every available moment fishing and boating in the area. One thing which was always prolific was the respect, admiration, and general infatuation people seemed to harbor for the sleek and celebrated custom sport fishing yachts hand-crafted just up Core Creek at Jarrett Bay Boatworks. With their superior craftsmanship, rich wooden finishes, distinct Carolina Flare™, and imposing prowess, the hulls laid at Jarrett Bay in Beaufort, North Carolina were, and still are, unmistakable.

Jarrett Bay Boatworks can trace its roots to the charter fishing industry off the rich yet sometimes unpredictable fishing grounds along the Atlantic coast. The company was founded by a charter captain, honed in the cockpit and at the helm, in 1986. Tasked with replacing an aging charter vessel, the builders set about crafting Hull #1: the Sensation. She boasted a knifelike entry, flattening out as the lines flow aft, yielding an efficient hull capable of weathering heavy seas, and providing a stable fishing platform while in search of marlin, tuna and other game fish. Many of these features remain key elements in the hulls built in Beaufort today. Capable of building vessels up to 120’ in length, and offering a host of marine services and the industry’s best collection of marine suppliers, Jarrett Bay offers a onestop boat building and service facility unlike any other. 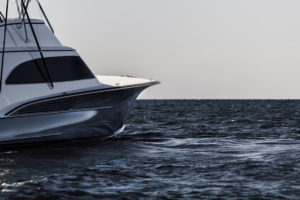 Here in west central Florida, we have no shortage of boats prowling offshore for just about everything that swims. Largely dominated by the center console design, the number of manufacturers catering to anglers and boaters is remarkable. With the exception of a few, most of these center consoles are fiberglass-molded production models. These all-fiberglass builds boast typically faster production timelines, lighter weight, and higher top-end speed compared to those which use more traditional build techniques. However, one of the sacrifices owners tend to make lies in customization, especially where the requested feature would require retooling the very mold in which the all-fiberglass model is laid. It is in custom boat building where Jarrett Bay Boatworks excels, pulling from their breadth of experience, to delivering shorter hulls with excellent ride quality, dependability, and efficiency. Custom crafted with the finest hardwoods, fiberglass, carbon fiber, and state-of-the-art finishes, these examples will turn both heads and reels when on the water.

As the first Jarrett Bay 32 Custom, splashed in 2013, the Miss Sarah was originally built for three-time customer and renowned golfer Curtis Strange. This open layout center console is a no-nonsense boat purposefully built for hardcore inshore and offshore versatility. At 32 feet in length with an 11-foot beam and a draft of two-and-a-half feet, the Jarrett Bay 32 Custom has the backbone to run and gun for kingfish in rough seas while also being able to prowl inshore waters for redfish and snook on the edges of the flats. Powered by twin 300-hp Yamaha outboards (but capable of up to 700 horsepower), the Miss Sarah cruises at 34 mph with a top-end of 40 mph. And with her 300 gallon fuel capacity, she can make extended runs or a multi-day trip with ease. A peek at the fanfare generated by the Jarrett Bay 32 Custom on www.jarrettbay.com speaks volumes to how excited many Floridian fishermen were when the details of this build came to light. 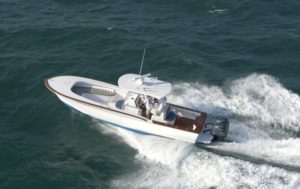 Careful chine placement and the Carolina Flare™ design of the Jarrett Bay 32 Custom ensure a sharp and dry hull entry and deft handling in uncooperative seas. The boat features a rich, high-gloss teak toe rail, which runs aft and atop the coaming boards, and teak decking covering her spacious 45 square-foot cockpit. This ample space to fight fish includes a stern split-lid 37-gallon live well, three rod holders in each gunwale, and four more in the back of the helm console. More rods can be stored in the six rocket launchers on the fiberglass gunwale-width T-top, which can be outfitted with radar, outriggers, forward and aft LED spreader lights and an electronics box. The custom T-top structure by Bausch American Towers can be finished with powder-coating or as polished stainless steel.

Dual Release Marine helm chairs provide a luxurious and comfortable ride. Custom cushions cover the forward and aft helm console benches and forward bench seating. Like her larger sister ships, the Jarrett Bay 32 Custom provides added features like a transom fish box and ample storage spaces throughout the boat. Concealed beneath the forward bench seating are starboard and port insulated fish boxes and a center storage locker behind the anchor locker. Beneath the forward and aft helm console benches are additional insulated compartments which can serve as coolers or general storage. 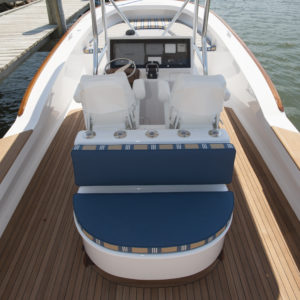 Additional customizations are only limited by the imagination of the prospective owner. Consider including a helm seating console incorporating a Seakeeper gyro stabilization system for more stability in rough seas. A bow thruster can be added into the keel to make maneuvering in tight places easier. A tuna door can be designed into the stern for bringing large fish or divers on board, as can a gunwaleheight diver door. A second helm station can be incorporated into the T-Top for spotting fish and managing multiple hook-ups. Add radar and an autopilot to make navigation safe and easy, especially on longer runs to the fishing grounds.

Large enough to conquer challenging seas, yet small enough to be nimble in shallower waters, the Jarrett Bay 32 Custom proves itself to be a worthy competitor in a world crowded with production-mold models. When coupled with the virtually unlimited customization possible with the talented build team in Beaufort, a prospective owner can realize a capable center console that will truly be like no other. 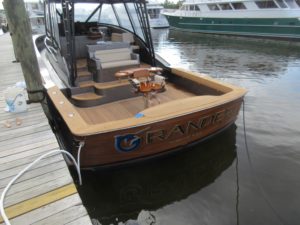 Demonstrating yet again what “truly custom” boat building is all about, Jarrett Bay Boatworks splashed and delivered their 61st custom hull, the Grander, in 2016. A head-turning 46’ walk-around express, Grander was the result of a two and half year build process. Commissioned by the owner of a tackle company, the boat will be based in the British Virgin Islands and provide an ideal platform to compete in any sea conditions. The Grander Team explains, “This is a billfish-targeted boat design. It isn’t even fair to simply call this a fishing boat. The Grander is the ideal marlin machine.”

Contributing to the machine-like appearance are some outright bold design choices, including the dark paint and black tower hardware. The result is an aggressively beautiful tactical vehicle. The boat’s militaristic look was intentional, and the result of a process that included input from the boat’s construction crew at Jarrett Bay, helping make her a stunning collaboration in design and functionality. The Grander Team explains, “The color scheme was chosen to be eye-catching and powerful. It is intended to go against the norm with a shock factor that stands out among the crowd of professional fishing boats. Jarrett Bay was able to achieve a physical appearance that’s never been seen before and the overall design and build experience with their team was great. The overall quality and finishes of their work is a step above the rest of the industry and they have exceeded our expectations.” 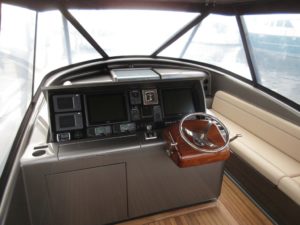 Carried out with metallic paints from Alexseal Yacht Coatings, including Steel Gray on the hull and Stardust Silver on the superstructure and decks, and with pitch-black framing by Pipewelders, the dark metals are contrasted beautifully by the organic suppleness of the custom teak decks, coaming boards and high-gloss toe rail. The rounded transom design was fabricated in faux-teak, offering an extreme gloss and exceptional durability with easier maintenance than authentic teak. Featuring chairs from Release Marine and glossy helm pods, the 46 is well equipped with Jarrett Bay’s more traditional luxury touches.

Another innovative Jarrett Bay calling card from her larger sister ships made its way onto the 46’ – the Jarrett Bay signature bucket chairs integrated into the forward cabin house. Nearby on the bow is a wealth of built-in conveniences and functionality, including drink and phone holders, twin livewells and tuna tubes, an anchor locker, pop-up cleats and rod holders perfectly positioned for tropical “run and gun” billfishing. 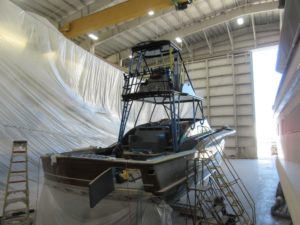 The Grander’s over 15 foot wide beam affords a 122 square-foot cockpit, arranged with a central mezzanine seat that doubles as a large ice maker and cooler, with two freezers accessible in the steps below. Two huge in-deck fish boxes straddle the Release fighting chair and transom livewell with tuna tubes. No space is wasted throughout, with the mezzanine steps and seating hosting multiple flush-face tackle drawers and dry storage. The primary helm features pilot and co-pilot chairs with an artfully designed electronics suite with the latest from Cat, Garmin, FLIR, iCom and Fusion. To starboard is convertible bench seating concealing rod storage, while additional seating, dry storage and an in-deck engine room hatch occupy the space to port forward of the helm. Topped off with a custom satellite and radar dome and her all-black fittings and rigging, Grander’s dark demeanor is lit in an impressive spectrum of color at night thanks to an extensive Lumishore LED lighting installation throughout the hardtop, gunwales and transom.

The clean and modern design flows below as the sliding companionway door reveals another striking mix of metallic and wood veneered surfaces. A compact, but capable galley occupies the starboard side which includes a wash basin, microwave convection oven, over/under refrigerator/freezer and recessed storage. A two person v-berth wraps around the forward cabin underneath a central overhead hatch. To port is an extensive tackle storage station, a combination rod and wet hanging locker, and a well-appointed head finished in Stardust Silver throughout. 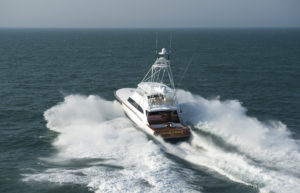 Powered by twin 1,136-hp Caterpillar C18 engines with ACERT technology, the boat is every bit as fast as she looks. Booking along at 39 knots while using around 90 gph, the Grander tops out at 45 knots with a fuel burn of 118 gph. Considering its 800 gallon fuel capacity, the Grander’s cruising range comes to almost 400 miles (346 nmi). The boat’s mechanical systems also include a 21.5 kW Cat generator, a generous 100 gallon water maker capacity and a Seakeeper gyro stabilizer. Lurking below her beautifully painted transom are wraparound exhaust outlets and an innovative stepped hull profile aimed at maximizing performance while backing down on gamefish. Grander’s aggressive styling and performance undoubtedly make her both a sight to behold, and a top predator in the Caribbean waters she calls home. As Jarrett Bay President Randy Ramsey stated, “Just like all our custom boats that have come before her, the Grander is this owner’s interpretation of the perfect boat. We couldn’t be happier with how she turned out and the response from everyone who has seen her has been overwhelming.”

Clearly, whatever you imagine your ultimate fishing battlewagon to be, Jarrett Bay Boatworks can deliver. Check out their 66 custom builds (and counting!) at www.jarrettbay.com, and on Instagram at @jarrettbay.