Captain James Kasper is all business at first glance; well, Florida business, that is – trucker hat, weathered t-shirt, board shorts, and flip flops. He’s just finished a meeting with his superintendent about some homes he’s building. Most of his year is spent this way, managing the construction of new homes and renovations on others throughout Pinellas County. “I love the opportunity to be creative, both inside and outside of the house. I also love the reaction I get from some realtors who show my homes to their clients, boiling over about how they ‘just love the design features’, only to learn that the guy in the corner dressed like he just got off the beach designed everything.” But wait – isn’t this an article about a fisherman?

A Pinellas County native and father of five, Capt. Kasper really does love building homes, more so than catching most fish that can be found in the waters around Tampa Bay. “If you asked me whether I’d rather be working on houses or catching reds or snook, I’d tell you I’d rather be working on houses. But tarpon… that’s different.” Capt. Kasper hooked his first “silver king” in 2003 off Egmont Key. He was asked by a business associate and long-time Tampa Bay angler to join him on a trip specifically targeting tarpon. The trip wouldn’t be forgotten; he regales, “It was my first tarpon trip. We rigged up our first bait, tossed it out, and soon after, hooked up. I saw that fish flying through the air, and that was the moment I knew I was going to love tarpon fishing. First bait, first cast, first fish – a 135-pounder. We soon after landed one that was about 150 pounds. I was hooked.” 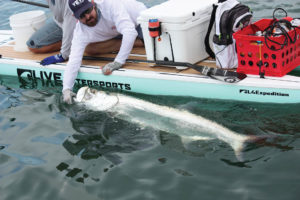 Capt. Kasper would soon learn, though, that not all trips would go quite like his first. Determined to catch more silver kings, he spent many a morning or afternoon on his 23-foot Everglades trying to replicate the success of that first trip. “I wasn’t very good at first. There are so many variables that go into having regular success when the tarpon migrate through, and I had a great deal to learn. You have to time the tides, the moon phase, and the bait. The falling tide is usually the most productive for me”, he adds. Capt. Kasper talks of knowing about when he was really starting to get the hang of tarpon fishing, saying “We’d see my ‘tarpon mentor’ back at the marina every night, and he would always ask me how we did. We’d tell him, and ask in kind, only to hear about how he had once again dusted us. Then one day, about six years ago, I asked him how he had done. He replied, ‘It’s been tough today. Not a lot of fish, and not a great bite. We jumped two, and landed one. How about you guys?’ Excitedly, but reserved, I stated, ‘We jumped four and landed three.’ I knew then I had crossed a point, and all those years of learning the timing and feeding patterns had paid off.” 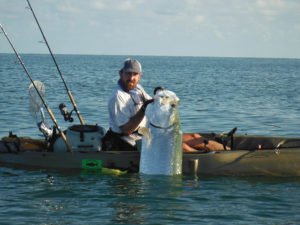 A great deal of knowledge is needed to successfully pursue tarpon. Capt. Kasper notes that anglers need to spend time learning the areas in which they fish – how the water moves with the tides; where, when, and how to find bait; how to time your fishing with the moon phases; how to track different schools of tarpon; and, how to present baits, just to name a few. “Don’t place your baits where there aren’t any fish feeding. If the fish are sitting on the bottom, don’t float all your baits on the surface, or you won’t catch a thing. Fishing the falling tide as the moon is waxing to full is a good bet, but the real key is to be prepared. If you want to fish the beach, and you’re spending the morning catching baits and rigging tackle, you’re already too late. All of that needs to be done the night before, and you need to have baits in the water and fishing right before dawn. I can’t tell you how many tarpon I’ve caught right as the sun was rising.” Capt. Kasper also disclosed a bit about how the tarpon move around the passes during certain moon phases, adding, “Once the fish leave the pass after the tide has slowed, look along the beaches. If you can find the schools and patiently track them, you can sight cast to them. A key is to be able to differentiate between the fish migrating up the beach and away from the pass, and the fish waiting around outside the pass for the tide to start moving again. Those fish are going to behave differently when pursued and presented with your baits.”

Capt. Kasper has been “Captain” now for three years, when he decided he could 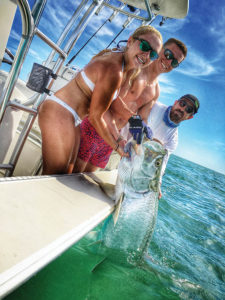 pursue his passion for tarpon in a more professional way. He now operates a 26-foot Gause with a tower and second helm station, giving him the ability to better track and put clients on fish. He shared a couple mishaps with us from his early days as a professional guide. “Both of these stories involve running aground… which you don’t want to do at all, and especially not with a charter,” he laughs. “Back in 2015, it was one of my first charters, and I had former Tampa Bay Bucs punter Mike Koenen on board with his sons, and I was already as nervous as could be. It was a new moon, we were leaving before dawn, and it was really dark. I mistook a shoal sign as a channel marker and stuck the Gause dead in the flat. Mike and I had to get out and push to get the boat back into water deep enough to run in, but he was a good sport about the whole situation. Soon after, we made it to our destination, got on a nice school, and Mike landed his first tarpon, after sharing the fight with his sons. It was ultimately a great trip, only made better by getting a photo that night from the hospital with the birth of twin girls…catching poons with his sons in the morning and having daughters in the evening…definitely a day neither of us will forget!” Kasper continues, “The second incident of running aground was with a friend from Raymond James and his very important out-of-town clients he chartered me to take out. In previous years, he hired some of the best guides in the Bay for his clients, but this time he was giving me a shot. I was up in the tower, and we were all just chatting away, and before we even made it out of Frenchman’s Creek, I cut the turn too early and stuck the boat in the sand. They all gazed up questioningly at me, with a look that said, ‘is this guy really a guide?’ I just laughed, since there was little else I could do, and told them, ‘Don’t worry- the last time this happened, we caught fish!’ Sure enough, we hooked up with four tarpon that day, and landed three.” 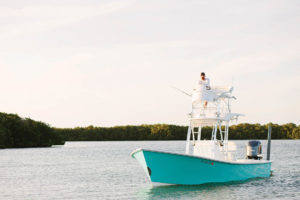 During tarpon season, you’ll find Capt. Kasper on the water chasing his favorite fish. He participates in both the Suncoast Tarpon Roundup, which is a 10-week Tampa Bay tournament; and the Ed Albert Tarpon Rodeo, which is an invitation-only guided tarpon tournament and charity event benefitting Tampa Bay Watch, in which he placed second last year. He also participates in the Sarasota Tarpon Shootout, benefitting Heroes on the Water, and regularly donates guided trips for other various charitable causes.

If you’d like to book a trip with Capt. Kasper on his 26-foot Gause, you can reach him at (727) 643-5709, and you can follow him on Instagram at @tarponcaptain. He uses Shimano Saragosa reels with Maxcuatro braid on Shimano Teramar, Tallus, or Terez rods, and is a Pro/Select guide for YETI, AFTCO, Boaters Republic, and RCI Optics. He runs either “Morning Trips”, “Hill Tide Trips”, or “All Day Trips” during the season, which, he expects to begin around the middle of April in 2018.

Written By
Flocal
More from Flocal
From an early age Tracy Negoshian believed the right clothing could make...
Read More